I have felt like 2020 is both a year where time is frozen and a year asking me for more. I am constantly torn between wanting to push myself to do so much and wanting to lay on the couch all day. Some days I am motivated, others I am not. But overall, I have been saying yes to some crazy things…like covering 50 miles in one day.

Back in January Kyle and I were out to brunch and he was talking about the new Bondi to Manly path that was officially open. He looked up the distance (roughly 50 miles) and said out loud, “wouldn’t it be cool to do that in one day?” I laughed. Kyle did you just realize you said you want to be an ultra marathoner?! We chatted about it more and decided we would attempt it around June this year.

Well, this year did not go as planned. We dealt with some things in May/June that had both of us hardly sleeping or taking care of ourselves. So, June was out. I had mentioned this to Julia and she said she wanted to join us on the trek and said how about August 1st?

Kyle and I figured sure, why not? We added it to the calendar without a lot of lead time. And I decided I wanted to raise some money for two amazing organizations to make the miles a little more meaningful. We started our GoFundMe on Sunday, planning to fundraise for the 5 days leading up to our trek. (I know this all felt a little last minute. But that’s what I wanted. We had to just go for it and not think about it too much).

I was blown away by the generosity of our friends and family. We raised over $1500 for The Loveland Foundation and the Indigenous Marathon Foundation. It helped us get really excited. We would not want to quit knowing the support we had for this very unofficial event. There wouldn’t be any spectators, no medal, no finish line. We were just going to go out and casually cover an ultra distance.

We knew there would be elevation. Sydney makes it pretty hard to avoid in general. But we did not practice pieces of the course. We kind of wanted to be surprised.

We also decided to do the route in reverse since we live in Bondi and figured it would be better to end at home rather than need to get in a car for a 40 minute drive after that kind of day.

Thankfully Julia’s fiance agreed to drive the three of us out to Manly at 4:30 in the morning. It was time to go for it.

We arrived in Manly just after 5 a.m. and began our adventure. Headlamps were on and we were in the dark. We had about an hour before the sun started to rise. This area once we were away from the beach was pretty technical, so we were walking.

Our plan was to run once the sun was up. Kyle had agreed to run about 10 miles of the distance. After the sun came up we ran for probably a total of 20 minutes and Kyle said, “nope, walking it is.” We had already covered a decent amount of elevation and he knew if he was going to make it all day, he had to walk. And Julia and I weren’t going to leave him behind.

We truly had a beautiful day. Winter in Sydney has actually been my favorite. There’s still a lack of daylight hours, but we were in shorts and perfectly comfortable once the sun came up. 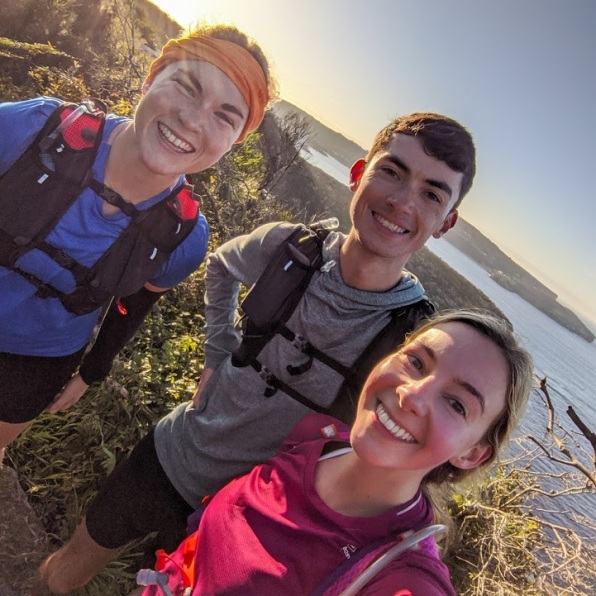 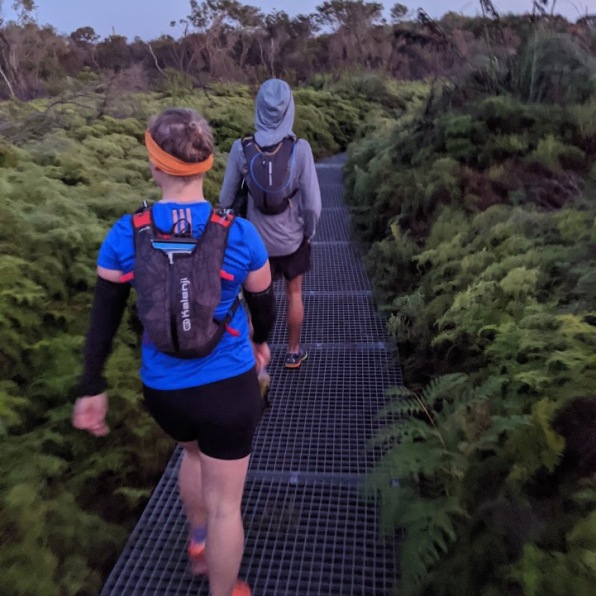 We made a quick stop for coffee after a couple hours. No sitting down or stopping our watches was the only real rule of the day.

There are some markings along the course, but we still had to have a Strava route up for the majority of the day. There are some extra turns required that are not intuitive. The terrain was a mix of trail, gravel, mud, concrete, grass, sand, OCEAN, etc. The mix was kind of hilarious. We couldn’t have imagined covering this path on a rainy day.

We all felt good at the half marathon point (thank goodness). Stopped for another coffee. Kyle did most of the navigating at first with his phone plugged into a power brick. He threw headphones on around mile 20 when he started hurting.

Julia and I felt good. It was truly beautiful. The surroundings were distracting and kept us going. As we made our way to the Harbor Bridge, we saw at least four engagements/weddings – that was cool. And crossing the bridge itself was awesome. Just one of those iconic things when you can see the Sydney Opera House and so much of the city. The stop for ice cream cones after the bridge helped our moods too. 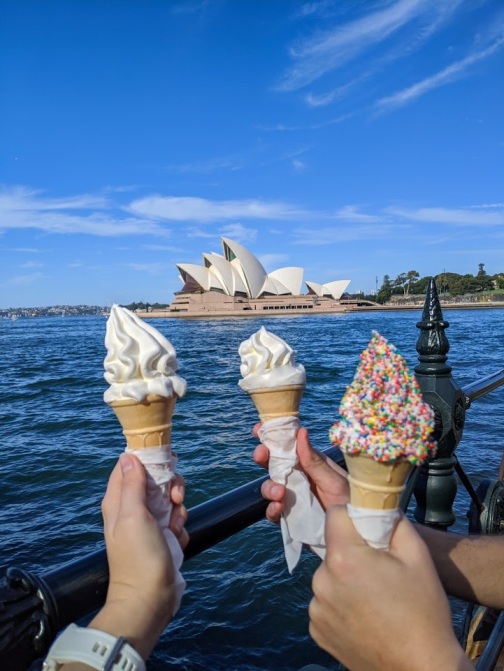 We ate as we went. We all packed some sandwiches, protein bars, pretzels, gels, etc. We tried to just space out the eating and savor our water. Our only planned aid station was around mile 32 where we had two friends waiting for us with Gatorade, snacks and water refills. When we got to them Kyle changed his socks (broke the sitting rule) and we stood and talked with them for about 10 minutes.

We lucked out with bathrooms along the way for most of the route, so after another quick stop, we were off again and feeling refreshed. Kyle had his podcasts on and Julia and I were chatting. We knew he was hurting, but we tried to just keep him moving. 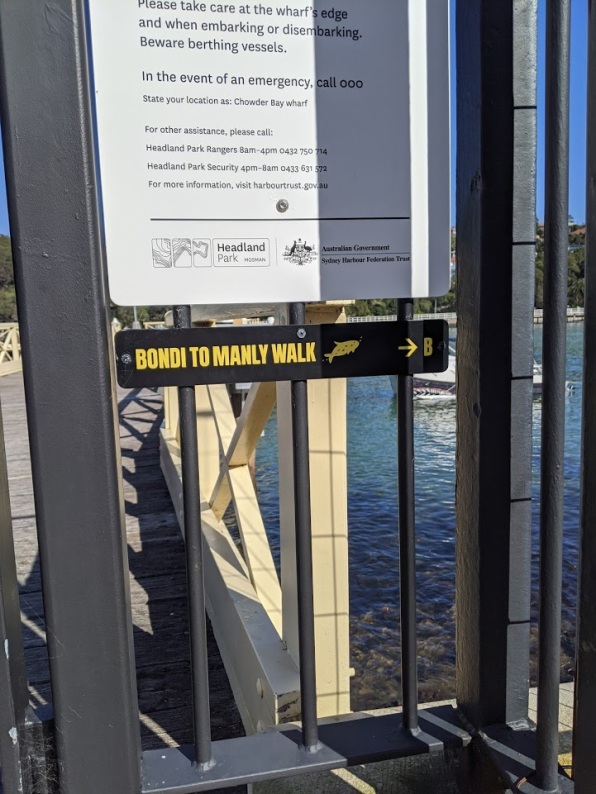 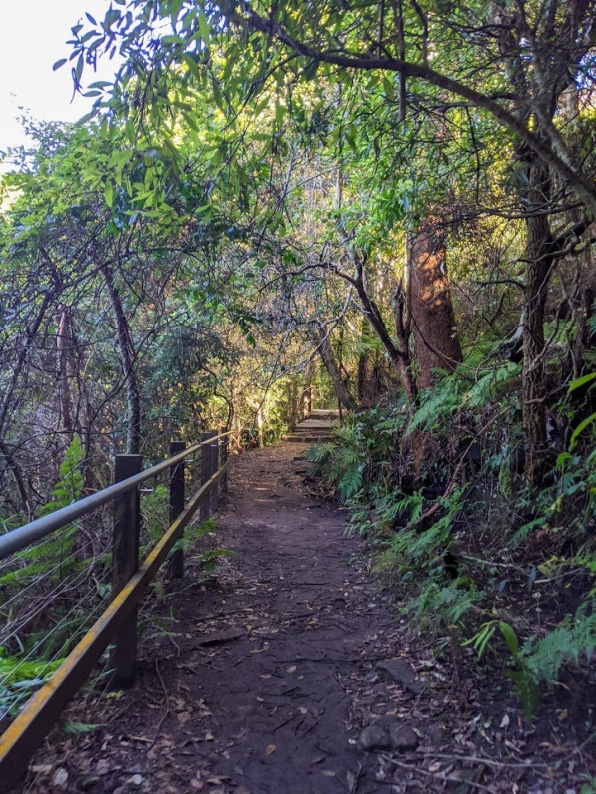 We got to Rose Bay, close to our home, at around mile 37 and Kyle decided to turn in. He was in pain and didn’t want to slow us down any more or risk really injuring himself. So, he turned off. He had never even run a marathon before this day and I was so so proud of him. 38 miles is no joke. He was an ultra marathoner.

Julia and I kept going. The sun was setting now, around 5:15 p.m. And we knew we were in for the hardest few hours yet. We both had been feeling good up until this point, but we couldn’t run anymore either now. Plus in the dark, we didn’t really want to risk falling or getting lost. We kept walking.

After mile 40 the miles were passing SO SLOWLY. Julia wanted me to yell “THIS SUCKS” at the top of my lungs with her and I didn’t because I didn’t have the energy lol. But our feet just hurt so bad at this point.

To distract us, I basically talked for 3 hours about every friend I have ever had. It was nice to reminisce and tell her about so many great people. She took turns with some stories and we tried not to focus on what we were doing. It helped.

Around mile 47 I had my crying breakdown. I thought about everyone who had donated for those last few mile markers, how much I miss them, how difficult this year has been. It all hit me. I told Julia, “I am crying, but I am fine.” We stopped for a hug and then kept moving. She had her crying moment shortly after. WE WERE A MESS. But we never stopped. We didn’t sit. We kept moving.

I was thankful Julia was navigating because I couldn’t even focus at this point. I was hungry, thirsty, tired, sore. So ready to be done.

As we neared the end, our final descent to Bondi, we passed two guys that said, “Woah long walk?” And Julia said, “Yeah we’ve come all the way from Manly.” His face and response were priceless. “…today?” We had a good laugh at that point.

I was so glad I had Julia with me. I definitely would have quit if I had been in the dark on my own. 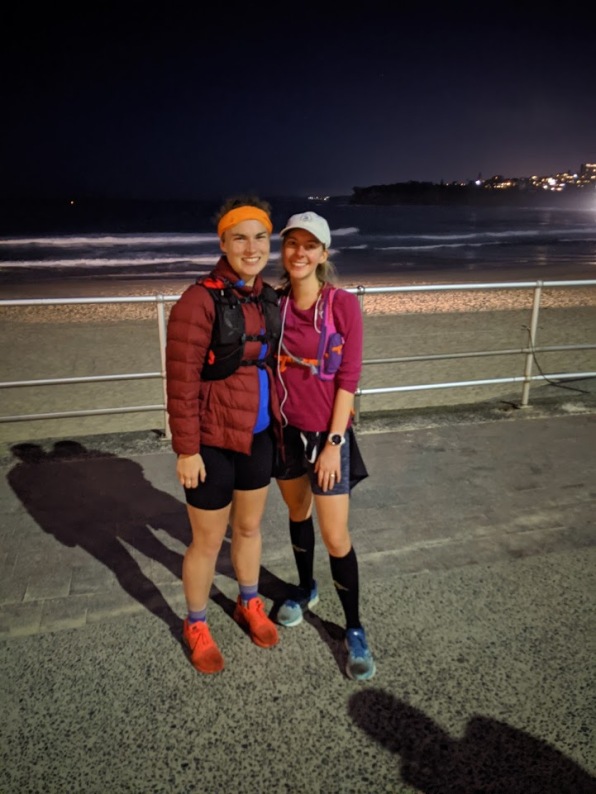 As we finally got to the beach we saw her partner and Kyle, and slowly cried/hobbled our way to them. There was no finish line, no medal, no post-race party. It was just 9:30 p.m. and we were completely exhausted. But we DID IT! I was in shock. And incredibly proud.

Julia has already asked me if I want to try again. (Only 7 days after our attempt). Lol. I won’t say never. But I definitely need to forget how my feet felt at hour 16 first. I would like to see what it is like running most of it compared to walking. Less time on my feet would be good. And it truly was beautiful. I might want to try again, but definitely not any time soon.

Thankfully, we all came out okay. Kyle was walking around just fine two days later. Julia was running that week. And after five days of very little movement, I was feeling normal too. I had a slight tendon irritation on the top of my left foot from overuse/all the stairs. But it was healed within a week or so. I took 14 days off from any running and focused on getting lots of sleep. Very grateful no one was hurt!

This course is challenging. It is not super clearly marked, so it requires frequent map checking. We took a few wrong turns throughout. If you want to do this, I’d recommend actually practicing parts of the course beforehand so you have a better idea of where you’re going.

Practice more time on feet! If you know you will be walking a lot, I’d suggest adding on a few hours of walking after your training runs. I wish I had done more really long walks in addition to runs.

Have a couple crew spots. With an unofficial event you do not have aid stations. We had one nice friend stop for Gatorade and we looked forward to this all day. It would have been more fun to have a few of these connection points throughout the day!
I really learned a lot. And this adventure did make me fall more in love with ultra adventures, even with how difficult it was.

We are on the leader board: https://www.bonditomanly.com/leaderboard

Not many people can say they have attempted this feat. That’s pretty cool. I made a video of our journey if you want to see more of it, too.

And I look forward to the next crazy adventure we come up with.