I raced a half marathon for the first time in over a year on February 23rd, 2019. I’m on a 50 state race quest and I like to use my February birthday as an excuse to travel somewhere new, a bit warmer and run a half marathon. This year I chose Greenville, South Carolina. That meant my race would be the Swamp Rabbit Race to Greenville.

I didn’t know anything about this race, but I knew it would be warmer than Chicago, so I was in. Kyle and I booked our flight and planned to spend three days in SC. I was really excited to race even though it would be on only 7 weeks of training and untapered legs. I didn’t have big expectations, but I knew I would try to run fast. I was excited until the Thursday before we left when Kyle got so sick. I felt bad for him, was worried he wouldn’t be able to go with me and worried I’d get sick too. But he mustered up his strength and we got on our flight Thursday night.

On Friday I went to pick up my race packet. It was very low key and the volunteers were really friendly. An easy, nice packet pick up is one of the reasons I love smaller races. It helps me stay relaxed.

After dinner I set out my race outfit, drank my coconut water and went to bed early. I was calm.

This race is a point to point, so you start pretty far away from the downtown area. It was 43 degrees and drizzling when I got to the start area. Kyle dropped me off and I had 15 minutes to warm up. I covered about 1.50 miles and threw in some strides. I was just trying to focus on the fun I was about to have, not the pace I was going to try to run. My coach had asked me to cover my watch for this race. We’ve chatted about how my watch can hold me back if I see I am running at a faster pace than I think I can sustain. So, I agreed to try. I figured there would at least be clocks on the course.

I went to line up for the National Anthem after my warm up. There weren’t corrals, but I did see a few pacer signs so I went in between the 1:30 and the 1:37. It was a crowded start and once the cannon blew I still had about 10-15 seconds of easing my way through the starting mats. But I was off. My watch was under my sleeve and there it was going to stay.

I found myself right by the 1:30 pacer by mile 1. He told us he would run the first 4 miles a bit slower since they included all the hills, but then he would pick it up. So I decided to stay with him for 4 miles. There were some definite hills in the beginning, but nothing as bad as what I have been training on. I remained confident and followed this guy for 4 miles. And realized I hadn’t seen a time clock, but there had to be one at the half way point at least, right?

Wrong. I had been feeling good. I didn’t know what pace I was running, but I wasn’t as tempted to check as I thought I would be. I focused on how strong my body felt and how I just needed to lock in my pace and stay there. But I think part of me was really expecting a half way clock. When I didn’t see one, my heart sank. But I was over 6 miles in, I thought I was cruising and I wasn’t tired. I took these all as good signs. It didn’t really matter what pace I was running because I felt comfortable and that is what mattered.

I took my GU with water around mile 7. I half expected some stomach cramping, but happy to report it did it’s job and I felt fine. At this point I just had to stare straight ahead and keep moving.

The rain started at about mile 10. It wasn’t super heavy, but definitely more than a drizzle. A spectator with an umbrella and a cute pup shouted to me, “28th woman. Looking strong.” And it was a nice pick me up. The 28th woman was probably running her PR pace, right? It was kind of unreal not to know. But it helped me mentally to just focus on running. No numbers, no clock checks, no watch checks. I was shocked at how good I still felt. And I was only 3 miles from the finish.

Now this had been a straight shot on the Swamp Rabbit trail since mile 4-5. I didn’t expect any turns. And all of a sudden I came to a bridge that required a right turn. And I turned in front of it. It was a dumb move, but I was so focused that I couldn’t stop my forward motion. A volunteer called for me and I got back to the bridge, but it had cost me probably about 10 seconds. Not that I thought it would matter.

I didn’t spend any time beating myself up. I was having a great race, and this wasn’t all about time after all. This was to test my fitness during this Boston Marathon training cycle and based on feel I knew it was a confidence boost.

The last mile I told myself to just “pick it up” – whatever that meant. I wanted to leave it all out there. I could see the finish line from around the corner and I knew I had less than half a mile left. I rounded the turn, sloshed through a huge puddle and made my way to the grass. The last 0.15 stretch to the finish was on muddy grass, but I thankfully didn’t slip. I threw my hands up and tried to smile. I made it. 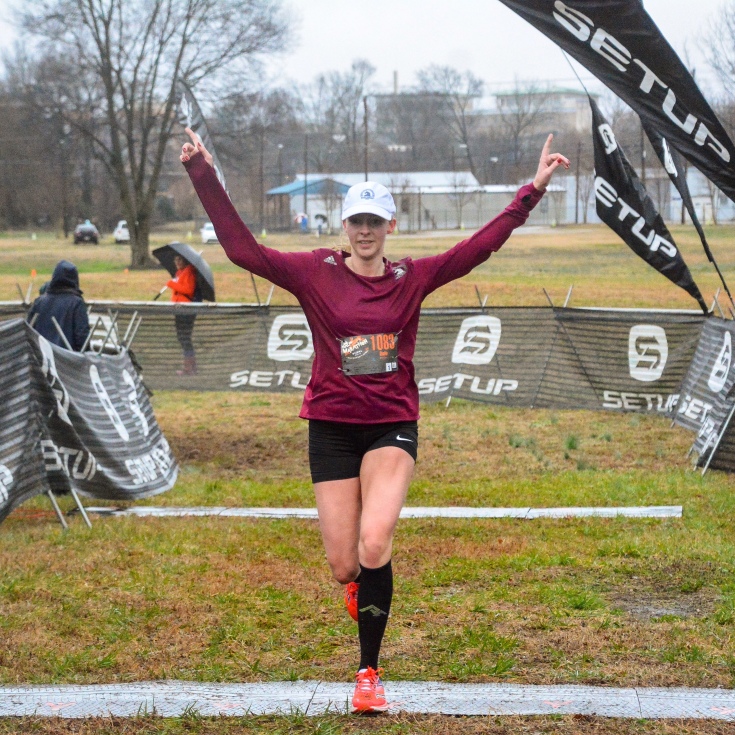 I looked down and saw the 1:32:05 on my watch. WHAT. That’s a 3+ minute PR from the last time I ran a half. But I was also instantly bummed to have missed NYC Qualification by 5 seconds. Not that looking at my watch would have made a difference, but how was I so close… I met some IG friends after and it was great to hear how everyone’s races went. Found Kyle near the finisher area and saw my official result read 1:32:08. It was what it was. I was still super happy. I looked at my splits and 9 of my miles started with a 6. My last mile was my fastest of the race with a 6:45. I was in a little bit of shock that I had just run this time and felt so good.

I love the half marathon distance. It’s a challenge, but it’s the kind of race I can run in a new state and still have energy to explore post-race. South Carolina was my 13th race state and I’m so happy I chose this as my February adventure. It’s always a good thing to get out of your comfort zone and explore a new space. If you’re looking for a well run, fun race in Greenville – I highly recommend the Swamp Rabbit.

This race was a big personal win for me. It gives me confidence going into my last 6 weeks of training. I am faster than I think and sometimes I just need to trust myself. Covering my watch and running just for my love of running really worked for me. I think I’ll have to try the same thing at my next half (and find myself those missed seconds).

There was an error retrieving images from Instagram. An attempt will be remade in a few minutes.