I’m a little late on this race recap, but life has been pretty crazy lately with moving and everything. Finally got around to writing it!

Let me start by saying I absolutely loved this race. It was the perfect way to spend my 23rd birthday weekend. A trip to Georgia filled with running and good food was exactly what I wanted in a birthday celebration.

This race was five separate races that added up to the distance of one full marathon. 26.2 miles. The line-up: 5K, 10K, Half Marathon, 2.8 Mile Beach Run, 1 Mile Fun Run. 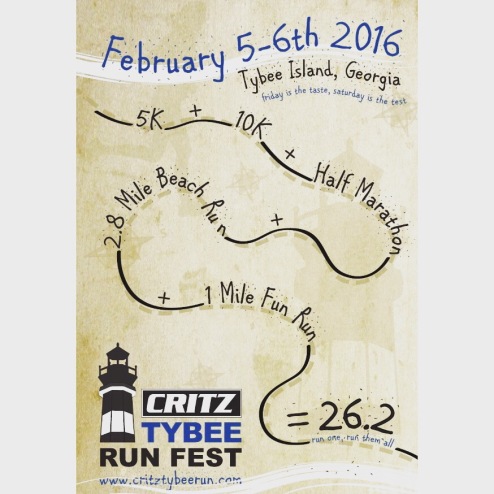 First up was the 5K on Friday night. I was able to pick up my packet about an hour before the race Friday night, head back to the hotel to change for the 5K, and make it to the start line on time with little stress. I love low-key packet pick-ups. I was honestly most nervous for the 5K because short distances freak me out and I’m not a great night runner, but I was excited anyways.

I had a nice chat with an older woman while waiting at the start line. This was about to be her first marathon distance and it was a goal she’d had for herself her whole life. It was pretty inspiring to see her at the start line at the age of 70+. It was a great way to start off the race weekend.

The 5K FLEW by. I was groovin’. It was pretty dark and I was little nervous about tripping and not being able to run the next morning (I’m a worrier), but all went well. I finished with a time of 21:22 – 6:53 pace. The fastest I’ve ever run a 5K! And I earned a second place in my age group, so I got a bonus medal. Plus I ran into keen_forarun & lindsey_runs at the finish line. SO awesome to hangout with these girls in real life.

Saturday morning meant 4 more races. All pretty close together. I was ready. My legs felt okay even with the 5K PR from the night before and I was ready to conquer. 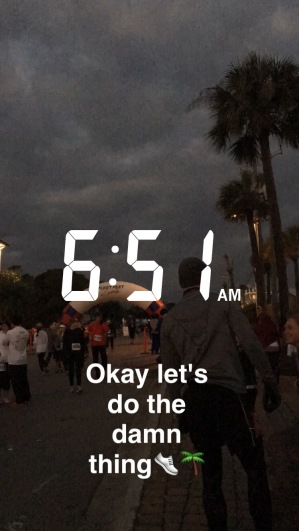 A quick 20 minute break and then it was back to the start line for the half marathon. Mentally it was hard for me to cross a finish line, take a quick break, and then race again. But at least I got used to it after the first couple races. The half flew by as well. It was really windy and I tried to stay behind people to shield the wind a little bit. I kept my Garmin under my sleeve and didn’t check it the entire race. I was just running by feel and enjoying myself. Turns out I was only about 20 seconds off my half marathon PR. What?! Again I was shocked. Finished with a time of 1:43:02 – 7:53 pace. SO happy with this time. I’d just run 19.3 miles at a sub eight minute pace? This was way more impressive than I thought I would be. 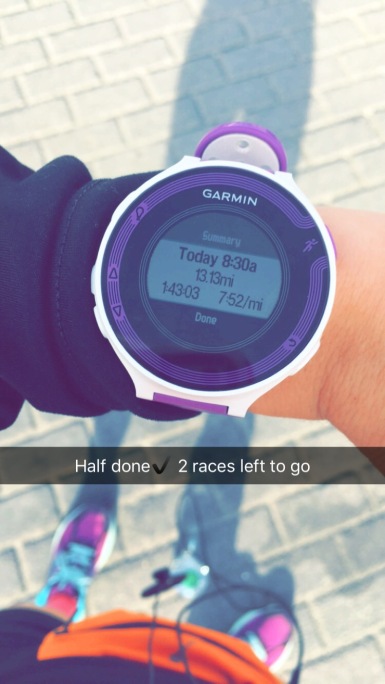 The next break was the hardest because it was over an hour. Luckily my boyfriend was running the beach run with me, so I had that as a change of pace. There were 30-40 MPH winds coming off the ocean. Nuts. And we were running on sand. I felt like my legs weren’t moving. The 1.4 miles out felt like they’d never end. I was averaging about a 9:30 pace and I felt like I was sprinting, but at least it was an out and back course. We turned around (around a person in a shark costume) and had the wind at our backs for the second half, which helped a lot. Ended up finishing with a time of 24:26 – 8:51 pace. 3rd place in my age group! I hadn’t had any practice running on sand, but it was better than I expected. If the wind hadn’t been so crazy I actually might have enjoyed it. Either way it was a cool experience because it was something different.

The end was near. A short 30 minutes break in-between the beach run and the the 1 mile fun run was all that was left. I got to the start line with Kati & Lindsey. It was nice to have the company after/before each race. And they were both killing it, so it was fun to see them doing so well. We just had 1 mile left. It was a pretty slow mile and my legs felt like bags of bricks, but I managed to get through it. 1 mile. 8:15 pace. And I was done. YES!

My overall time was 3:25:05. 7:49 pace. I was SHOCKED by this time. This race was so so tough. I loved every minute of it, but it was the hardest race I’d ever run. I finished with a much faster overall time than I thought I would, but I was happy. I felt good. I was tired and starving, but I was happy. I even finished as the 2nd Female Overall for the 21-30 age group, so I got an extra medal. (I’m all about extra medals!) 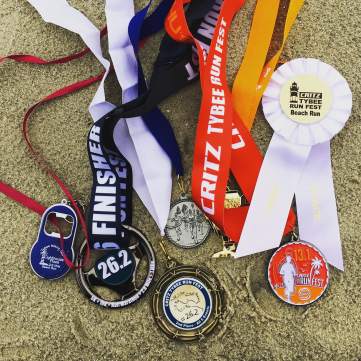 I’m so happy I decided to do this race. I really pushed myself. I trained harder in the month of January than I ever had before. I didn’t think I could pull off the marathon distance in the middle of Winter, but I did. And I did it well. This race gave me the confidence boost I needed to train for a Boston Qualifying time this fall. I really am faster than I think. And I just need to keep pushing myself! 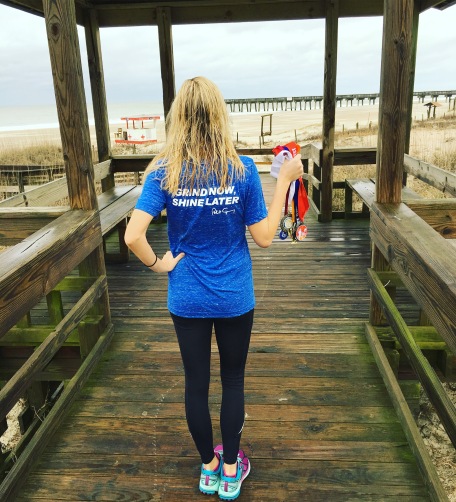 I’ll be back Tybee. You were the best.